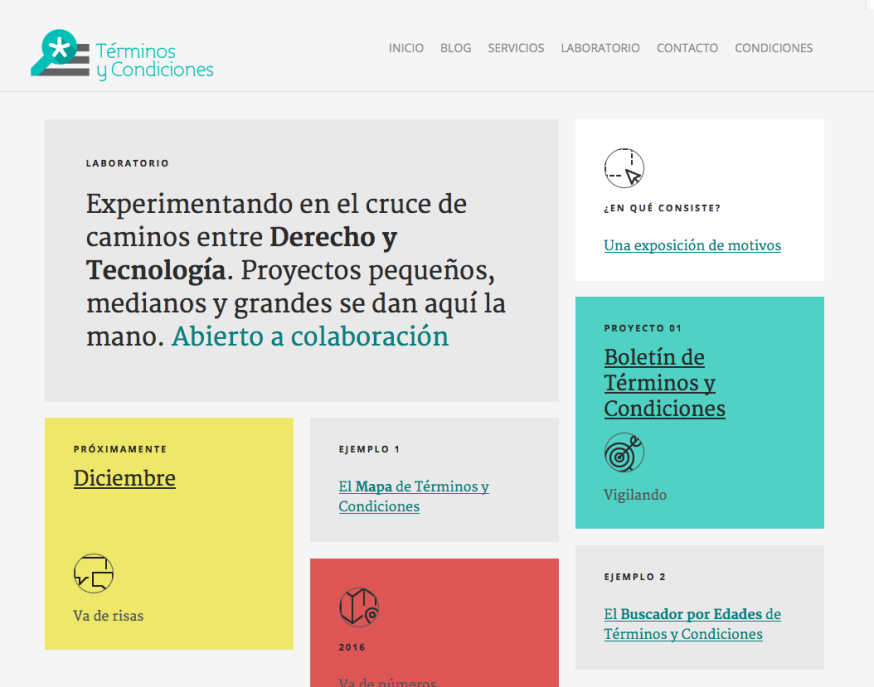 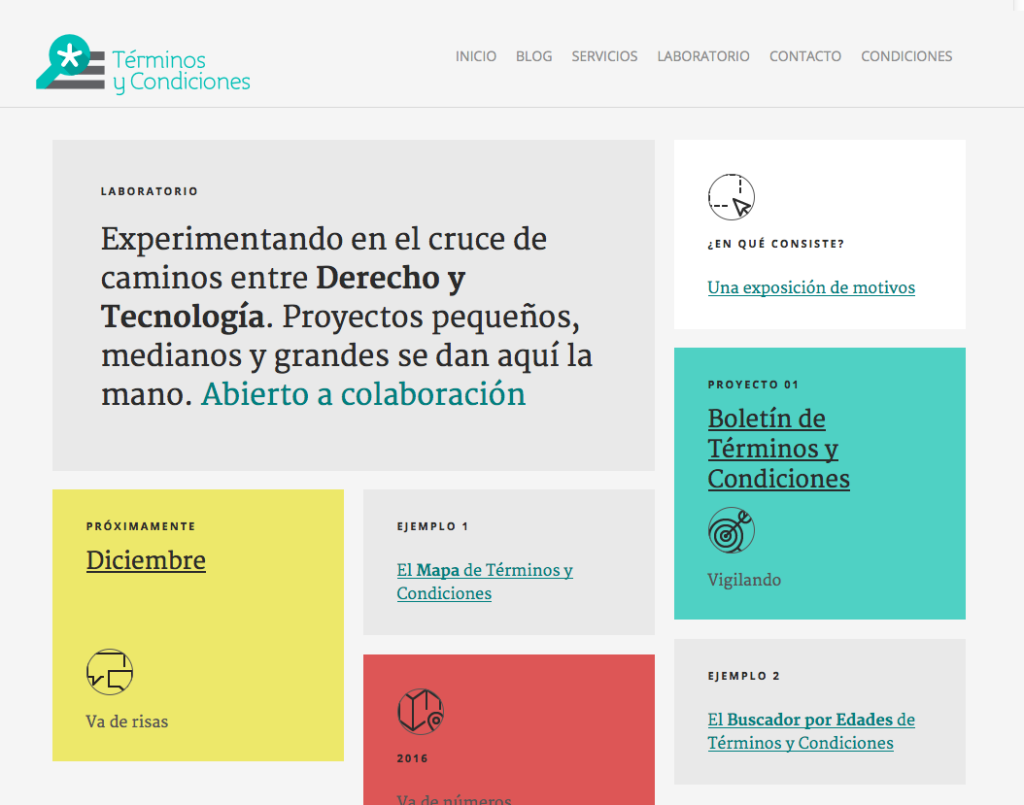 The project Terminos y Condiciones from Mallorca Spain is experimenting with new ways to help people stay on top of the terms and conditions they agree to when they use products online & elsewhere. They’ve built a tool that lets you keep track of any changes in companies’ policies.

Here’s an article from TechCrunch that covers this tool: T&Cs Change Tracker Puts Shifting Small-Print In The Spotlight.

As we’ve recently pointed out, here on TC, T&Cs suck. But what sucks even more than impenetrable, multi-clause legalese that no-one reads is the fact these unlovely documents can change without warning — effectively requiring users of the services they govern to engage in a perpetual reading to ensure they are abreast of changes.

Aka: “These conditions may change without prior notice, so we recommend you to consult them regularly.”In an attempt to circumvent this slippery, Catch-22 behavior, a team of law specialists and engineers based in Spain has put together an online tracker for T&Cs changes — to help flag up when small print shifts, and help users figure out when to take notice of a particular update (and maybe even read the relevant chunks of text).

The free tracker does this by comparing the most recent version of legal texts with the prior version, running a comparison every 12 hours to pick up changes regularly. It then lists (and dates) these changes, as well as color-coding their significance (including flagging up whether they have been communicated to users). It also displays the percentage of text that has changed since the last update.

Document changes are reviewed by “someone with legal knowledge” prior to publishing on the site — so it’s not just a tech-powered text comparison service, according to the team, but rather involves a layer of human expertise to determine how significant a T&Cs update is.

The tracker monitors changes in Terms of Use, Privacy Policies, Cookie Notices and multiple other legal texts that are generally badged as ‘terms and conditions’. Old and new T&Cs are presented side by side for comparison. Text that has been added to the new T&Cs is highlighted in green. Text that’s been deleted is highlighted in red (on the old T&Cs).

It’s currently keeping tabs on some 5,600+ services and 6,700+ legal documents (not all of these are available in English, with Spanish the secondary default if there’s no English version) — and says there have been just under 130 changes to T&Cs of the businesses it’s been monitoring in the past week.

As well as browsing recent changes, users can search for — and subscribe to — specific companies to keep track of how their T&Cs evolve.Recent changes flagged up by the tracker include genetic testing service 23andMe adding a suggestion for users to consult a genetic counselor prior to testing to its T&Cs; specifying percentages for when its labs aren’t able to process a sample (up to 3% of the time) or a second sample (up to 0.35% of the time); and noting that its research arm may be “sponsored by, conducted on behalf of, or in collaboration with third parties, such as non-profit foundations, academic institutions or pharmaceutical companies”

.While a recent erasure from TC parent AOL’s Terms of Service document removes explicit details notice that users signing up to its service and providing a mobile or landline telephone number are consenting to giving AOL the ability to use autodialed and prerecorded messages to contact them. A further deleted clause specifies that users are consenting to receiving SMS/text messages to their number, and provided information on how to opt out.T&CsExtensive changes to Apple’s “Commitment to Customer Privacy” document are also recorded by the tracker — including significant wording shifts (in line with Apple recently overhauling how it presents privacy info to users), and shifting details such as the proportion of Apple users where data has been disclosed due to a government request: less than 0.00571%” has been updated to “less than 0.00673%” in the most recent update.

Jorge Morell Ramos, one of the Mallorca-based team behind the tracker, notes that many companies are making (even more) regular changes to privacy policies in light of the European Court of Justice invalidating the U.S.-Europe data-sharing Safe Harbor agreement earlier this month.He says the tracker is one of multiple tech-law based projects the team is working on in its legal lab. They also want to develop an API for the tracker to get the information circulating more widely. The wider idea behind the lab is to develop legal tools and products to try to shake up a sector that’s pretty set in its ways, he adds.

This site uses Akismet to reduce spam. Learn how your comment data is processed.